Today’s topic of discussion is What Is The Difference between .223 Wylde and 5.56 NATO AR-15 Barrel.

First and for most, let’s get the terminology straight. .223 Wylde IS NOT your regular .223 Remington! I know, both sound very much similar but these are completely different animals. So let’s go into details.

Though they share identical case dimension, they are slightly different and thus, are not the same cartridge. 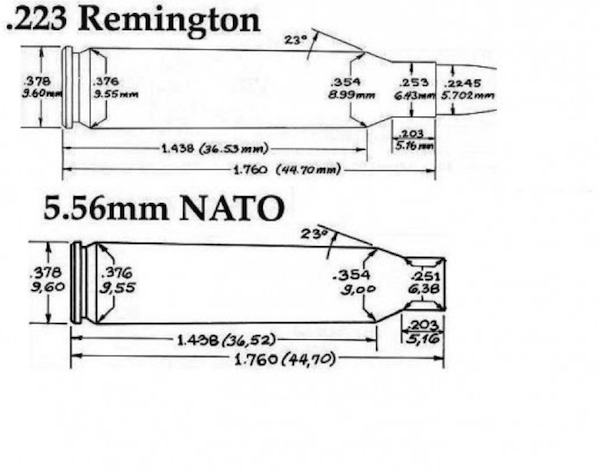 .223 Remington is slightly smaller than your standard 5.56 NATO. As we can see from the picture above, the throat of the 5.56mm bullet is slightly longer than that of the .223 Rem. Thus, it is ok to fire .223 rem rounds from the 5.56 chamber but it is not ok to fire 5.56mm rounds thru .223 Remington chamber. It will simply cause pressure problems.

To avoid this issue, Bill Wylde (and hence the name, .223 Wylde), had an idea to create a chamber that would clear both rounds, 5.56 NATO and .223 Remington. Hence, .223 Wylde was created – a chamber that takes advantage of both of these loads. In other words, .223 Wylde combines the excellency to handle both rounds in one source, the hotter 5.56 rounds without pressure concerns and .223 rounds that offer edge-on accuracy that’s so common for Remington rifles.

Logical question – If I can fire .223 Rem out of 5.56 NATO chamber, why should I care about .223 Wylde? The answer is simple. While yes, there is no issue to use .223 Rem in 5.56 NATO, however, if you are looking for tighter groups, you will want something with a tighter throat that .223 Wylde chamber offers – or simply put, a slightly tighter freebore diameter (.2240 freebore diameter). Thus, .223 Wylde is known for extreme accuracy. And as we all know, better accuracy equals more versatility, and that’s what we, enthusiasts, are always looking for.